Popcorn Lung Disease, or Popcorn Workers Lung, appears mostly among factory workers in microwave popcorn plants. The illness is thought to be caused by the inhaled vapors of the butter flavoring (Diacetyl) used in microwave popcorn.The most likely victims of this illness are workers who mix the paste or powder forms of Diacetyl with oil to prepare it for use in the popcorn packets. Popcorn Lung Disease occurs most frequently in regions where the manufacture of microwave popcorn is a big industry. There are many such hotspots throughout the United States.

Because the law firm of Humphries, Farrington, & McClain, P.C. represents people from every state, including Eric Peoples, they have probably represented someone from your city or county already. They are familiar with the principal manufacturers of microwave popcorn. They know about plants, the owners and managers, and the litigation history of each hotspot. And that’s why they have successfully tried the only jury trials in the country, with over $53 million dollars in jury verdicts and hundreds of settlements against the manufacturers, who protest that it was the employer’s responsibility to follow safety instructions.

Today The Insider Exclusive presents “Popcorn Lung Disease – The Eric Peoples’s Story” and shows how the flavoring Industry used workers like Eric Peoples as “Blue Collar Guinea Pigs” for years. Eric played by the rules; he worked to support his family. And the unregulated microwave popcorn industry virtually destroyed his life.

Kenneth B. McClain began his firm’s asbestos practice in 1984, when he represented the Independence, Missouri school district. It was the first case in the country to return a verdict for a school district to recover the cost of removing asbestos from a building. Since then, Ken has represented asbestos personal injury victims and owners of buildings contaminated by asbestos across the United States. On October 6, 1997, he settled the first individual tobacco tort action in New York for Janet Sackman, the Lucky Strike poster model. A 1982 graduate of the University of Michigan Law School, Ken is a nationally recognized trial lawyer specializing in toxic tort cases throughout the country. 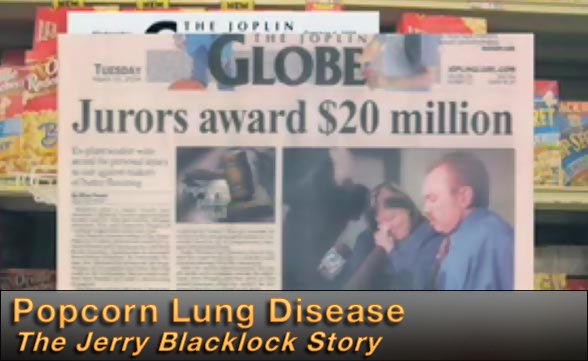