The show spotlights the story of Kerry Max Cook, who authored “Chasing Justice”, the brilliant and riveting chronicle of how a small-town murder became one of the worst cases of prosecutorial misconduct in American history and sent the author, an innocent man, to hell for twenty-two harrowing years. Kerry Max Cook is one of the longest-tenured death-row prisoners to be freed: This is his unbelievable story and the only firsthand account of its kind.

Through the combined and dedicated efforts of Paul Nugent, who is featured regularly on ABC’s Nightline, ABC Evening News, Court TV, the CBS National News, A&E’s American Justice, and MSNBC; and Scott Howe, and after a series of retrials was forced, at last, in November 1996, Texas’s highest appeals court threw out Cook’s conviction, citing overwhelming evidence of police and prosecutorial misconduct.

And finally in the spring of 1999 long-overlooked DNA evidence was tested and it linked another man to the rape and murder for which Cook had been convicted. Today, Cook is a free man and the proud father of a young son.

A shocking look inside death row, a legal thriller, and an inspirational story of one man’s ultimately triumphant fight against extreme adversity, “Chasing Justice” is a landmark work, written with the powerful authenticity of Cook’s own hand. It will forever unsettle our view of the American justice system. You can purchase your own copy of Kerry’s amazing book @ www.chasingjustice.com 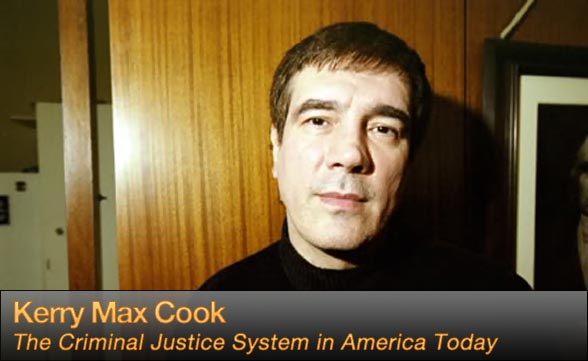