Time is running out to protect and save a generation of Syrian Christians caught up in Syria’s brutal war. These are just some glimpses of the unrest, the chaos, the savagery, and the slaughter that have raged on for the past 27 months….

In many Syrian towns… lawlessness has become the norm. When government forces aren’t present, Muslims have been known to rob churches and kidnap, rape, or even kill Christian women. Innocent bystanders simply making trips to the store have been gunned down. Curfews have done little to make anyone feel safer or less fearful, so the Christian community simply bands together…and prays.

Hundreds of these Christian residents have watched their lives — and their very freedoms — slip away right before their eyes. Homs, a city which has been occupied by both government and rebel forces for weeks, is now alone the site of more than 1,500 violent deaths.

As the Arab Spring continues to rage throughout Syria, thousands more people have lost their lives in a movement that seeks to strip President Assad’s regime of its power. And as Islamic protesters clash with government forces, Christians have become hopelessly tangled in the crossfire.

Some fear that the Iraq scenario of increased levels of sectarian attack and corresponding flight of Christians could be replicated in Syria….as seen in this first-hand look in a Syrian refugee camp outside Damascus. The strategic and humanitarian costs of the conflict in Syria continue to rise, not just for Syrians… but also for vital U.S. interests.

Chemical weapons have likely been used by President Assad’s regime against civilians, and more than 70,000 people have been slaughtered. Iran and its proxy Hezbollah are building a network of militias inside Syria. A staggering 5 million Syrians have been displaced from their homes. Meanwhile, cross-border spillover threatens the security and stability of America’s allies and partners Israel, Jordan, Turkey, Iraq and Lebanon.

The situation in Syria is complex and there are no ideal options. But The basic choice we face is not complicated: Do the costs of inaction outweigh the costs of action?

What can America do today…..to head off this impending humanitarian crisis against the Syrian Christians?

Today the INSIDER EXCLUSIVE Investigative News Team, “Goes Behind The Headlines” in “Syria – A Country & People in Crisis “, to visit with a dedicated American, Drake Shunneson, of the Shunneson Law firm, who are frontline activists and have been struggling to help countless Syrian American families here in the US to expedite family-based visas covered under the U.S. government’s visa program known as “Family Reunification”…even though the U.S. government’s visa program has a backlog of literally, millions of individuals waiting on a visa to come to the United States

And since America has established a “world-wide” limit on the number of visas… thousands of those who are qualified to emigrate to the US, and are still waiting…. are doomed to die in Syria because of our broken immigration system

As you can imagine, this causes a huge delay when an individual may be called up for a visa. As of February 9, 2013, for someone to get a visa that is the married son or daughter of a U.S. Citizen, they must have applied for a visa before January 15, 2005 as a F2B category. That’s an 8 year wait so far….And counting

Drake will share with the Insider Exclusive today, his endless frustrations that he’s encountered in dealing with the US State Dept and the U.S. Government, to try to help save the lives of these persecuted Syrian Christians who are still trapped in Syria…

These Syrian Christians have been abandoned by their own country, the U.S. government, and the international community. They have lost hope and….. if history repeats itself, will likely face another massacre soon.

What’s even more horrific about their situation is that many of them could’ve been saved if the U.S. family reunification visa program worked or if the U.S. government wasn’t willingly ignoring their cries for help and would establish for them a special refugee status.
The Insider Exclusive Investigative TV Series is asking America’s help now to have the State Department grant these minority Syrian Christians Special Refugee Status to get out of Syria now before it’s too late. To get them out of Syria, and past the rebel refugee camps in Turkey, so that they will no longer be slaughtered and persecuted because of their Christian beliefs.

As Drake has stated repeatedly….”We are blessed in this country to have freedom of religion, yet these people are being tortured for wearing a cross around their neck” 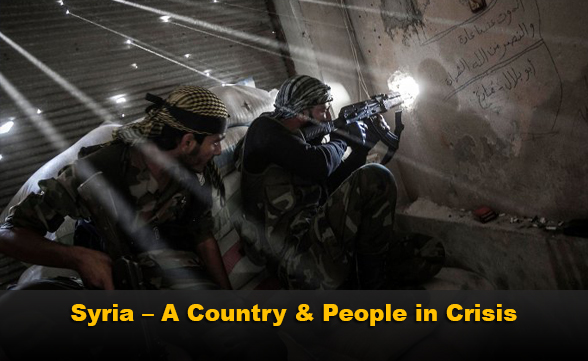 Syria – A Country & People In Crisis