Stacy D. Phillips, a founding partner of Phillips, Lerner, Lauzon & Jamra, LLP, Century City, CA, is not only of America’s best know Celebrity Divorce Lawyers, but she’s also a Certified Family Law Specialist licensed by the State Bar of California’s Board of Legal Specialization, is listed by Lawdragon as one of the 500 Leading Lawyers in America for 2006. In addition, The Los Angeles Daily Journal, Los Angeles’ main legal trade publication, also named Phillips one of the “Top 75 Female Litigators in California” for 2005 and 2006. Phillips also received that honor in 2003 and 2004 when that publication honored the top 50 female attorneys. The same publication once named Phillips one of the “Top 20 Attorneys Under the Age of 40″ in Southern California (1998). She also is listed among an elite group of attorneys by L.A. Magazine and Super Lawyers Magazine (for 2004, 2005, 2006 and 2007), as a result of a survey conducted jointly by Law & Politics and Los Angeles Magazine. She was also singled out by them in 2005, 2006 and 2007 as one of the Top 50 Female Super Lawyers” in Southern California, where she also placed among the top overall 100 vote-getters (men and women) for 2006 and 2007. She also was featured in the Los Angeles Times’ West Magazine as one of the Los Angeles area’s Best Lawyers in November 2006. Her distinctions from media also include those from the Los Angeles Business Journal where Phillips was named among the 50 Most Powerful Women in Los Angeles Law in 1998. In addition to her honors by the aforementioned publications, Phillips is also listed in The Best Lawyers in America and has garnered a coveted AV rating in the Martindale-Hubbell Registry.

In 1994, she assisted in drafting a bill to extend the statute of limitations period, allowing victims of domestic violence to sue their abusers in civil court. Having testified in support of the legislation before the Assembly Judiciary Committee, Senate Bill 924 was subsequently enacted into California law (California Civil Procedure Section 340.15).

In addition to The Insider Exclusive TV Show, Stacy has been seen and heard on television and radio programs such as “VH1’s All Access ‘More Celeb Break-Ups’ and ‘Celebrity Prenuptial Agreements'”, “Good Morning America,” “Court TV” radio and television, “ABC News ’20/20,'” “CNBC’s High Net Worth,” “Hard Copy,” “E! Entertainment Television,” “ABC San Francisco’s View From The Bay,” “Judge for Yourself,” “Inside Edition,” “Celebrity Justice,” “National Public Radio’s “Tavis Smiley Show” (discussing the Children’s Bill of Rights) Star TV, CourtTV.com, and is a regular commentator on “Access Hollywood,” “Entertainment Tonight,” and “The Insider”. Not only is Stacy highly sought after in the United States, she also appears internationally on programs such as the W Network and Movie Central (Canada Broadcasting), Cimema Tushin (Japanese Broadcasting), and BBC (UK Broadcasting). She did both a television and radio satellite tour speaking on issues couples should address prior to taking their marriage vows, on news segments for major stations throughout the country. She has been quoted in numerous publications such as the Wall Street Journal, People, In Touch, Cosmopolitan, Life & Style, Us Weekly, Glamour, Town & Country, Los Angeles Business Journal, California Law Business, New York Post, Entertainment Weekly, Chicago Tribune, Women on Top, the Arizona Republic, Los Angeles Family magazine, Sacramento Bee, Working Woman, Redbook, and CBS Market Watch, to name a few. She also has been quoted in the Associated Press. She was featured on in-flight radio programming segments for American Airlines in July 2005 and on United Airlines in November and December 2005. She has served as a regular columnist for Divorce Magazine and Yahoo! Personals and serves as managing editor for her firm’s bi-annual newsletter, Family Matters.

An author herself, Phillips first literary work, Divorce: It’s All About Control How To Win the Emotional, Psychological and Legal Wars, was released in November, 2005. In 2006, her book received a certificate of commendation from Mayor Antonio Villaraigosa, Councilman Jack Weiss and the city of Los Angeles. She has also edited for legal content and correctness the best-selling book, Money Smart Divorce by Esther Berger. She also has been asked on several occasions to provide critical reviews for books; primarily those written on business, divorce and family law.

She is the recipient of Jewish Women International’s Women to Watch award for 2005, AMIT’s “Women of Accomplishment” for 2005, the Century City Chamber of Commerce’s 2002 “Women of Achievement Award”; the Los Angeles Business Journal’s 2001 “Women Who Make a Difference Award; the Asthma & Allergy Foundation of America’s 2001 “Patricia McClure Award”; Bnai Zion’s “Women of Achievement Award for 2001” and the Israel Cancer Research Fund’s 2000 “Women of Action Award,” the latter of which provides the single largest source of private funds for cancer research in Israel. 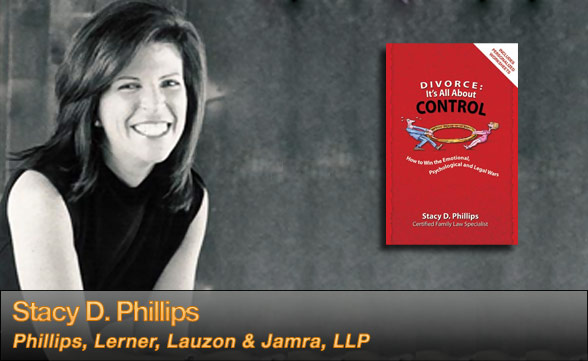