Ms. Holley was previously the Managing Partner of the Los Angeles office of The Cochran Firm and the head of its national Criminal Defense Section. With more than sixty trials to her credit, Ms. Holley is the rare trial attorney who practices in the areas of both civil and criminal litigation. She was a highly visible member of the O.J. Simpson defense team and worked with Mr. Cochran on a number of high-profile civil and criminal cases.

She successfully defended Sara Jane Olson in her highly-publicized cases involving crimes committed by the Symbionese Liberation Army more than twenty-eight years ago. Her clients have included Tupac Shakur, Snoop Dogg, actors Stan Shaw and Nia Long, and NBA basketball stars Larry Johnson and Byron Scott. She was also a member of the defense team which successfully represented celebrated Black Panther leader Elmer “Geronimo” Pratt in a highly-publicized hearing which resulted in his release from prison after more than twenty-five years and the reversal of his murder conviction.

Ms. Holley is also Chief Legal Correspondent for the E! Network, providing on-air commentary on topical legal issues concerning entertainers and the entertainment industry. She was on-air legal analyst for KABC Eyewitness News in Los Angeles for several years and appears frequently on the Today Show, Good Morning America, PrimeTime Live, The O’Reilly Factor, Court TV, Fox News and CNN. She was a featured lawyer on Fox TV’s Power of Attorney for two seasons and was most recently featured as an on-air legal analyst on the E! Network’s nightly international coverage of the Michael Jackson trial.

She has served as a visiting faculty lecturer at Benjamin N. Cardozo Law School’s Intensive Trial Advocacy Program in New York City for the past ten years and is a guest speaker at law schools on high-profile litigation, women in the law and the representation of “celebrity” clients.

Ms. Holley is a Los Angeles native who attended the University of California, Los Angeles (BA, English Literature, 1984) and Southwestern University School of Law, where she was a member of the Dean’s List and Commissioner of Community Affairs. She is married to Dorian Holley, a prominent and well-known singer who has toured with James Taylor, Rod Stewart and is currently the vocal coach on American Idol. They have a three year-old daughter, Olivia Rose. 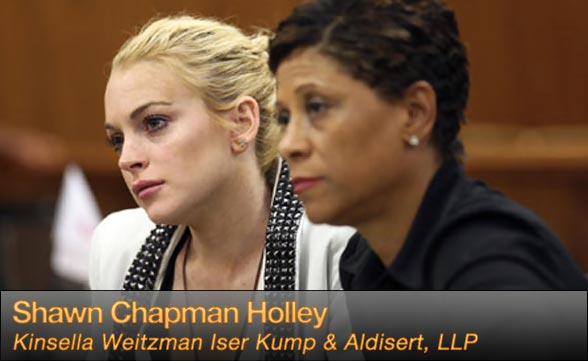