This special series takes us for an amazing in-depth look at one of one of America’s Best Know TV Legal Anchors, Trial Lawyer, & Best Selling Authors, Rikki Klieman. Rikki’s a true ‘larger than life’ character, whose life-time accomplishments span 4 careers, and serves as a role for ambitious people, especially to put in proper prospective a better balance between their careers and their lifestyles.

Rikki shares her experiences as the host of Court TV’s Both Sides, a program covering high profile trials of the day. She has been an anchor with Court TV since October 1994, analyzing trials and legal proceedings involving O.J. Simpson, Madonna, Dr. Jack Kevorkian, Louise Woodward, Jenny Jones and others. In addition, she has anchored Prime Time Justice and Cochran & Company, covering the Clinton/Lewinsky scandal and impeachment proceedings. She has also hosted specials on Election 2000, the Kennedy nephew murder charges, and the September 11th terrorist attack on America.

Rikki has appeared on all the major networks and has been profiled by CNN, The Boston Globe, Boston Magazine, The Chicago Tribune and other national media. She has published numerous articles on criminal defense practice and writes the bi annual supplement for Representing Witnesses Before Federal Grand Juries. She has also contributed to the book Women Trial Lawyers, and is featured in a chapter of Good Will Toward Men by Jack Kammer. Rikki has appeared in the films A Civil Action, NYPD Blue, The DA, Dr Vegas, Fifteen Minutes, Shark, The Cable Guy and An American Tragedy. She is co editor of a book on cross examination entitled Take the Witness and her autobiography Fairy Tales Can Come True How a Driven Woman Changed Her Destiny.

A practicing attorney for 25 years and member of the adjunct faculty at Columbia Law School, Rikki was named one of the five most outstanding women trial lawyers in the country by Time magazine. In 1990, she defended the Twitchells in the famous Christian Science trial of a parent’s right to choose spiritual healing for a child.

Rikki has a J.D. from Boston University School of Law a B.S. in Speech from Northwestern University. She has served on the Advisory Committee to the U.S. Supreme Court on the Federal Rules of Criminal Procedure and on the Board of Directors of the National Association of Criminal Defense Lawyers. She is currently a member of the Anti Defamation League and serves on the ABA’s National Conference of Lawyers and the Media. She is Of Counsel to the Boston law firm Klieman, Lyons, Schindler & Gross. She lives with her husband, Los Angeles Chief of Police, William Bratton, in New York and L.A. 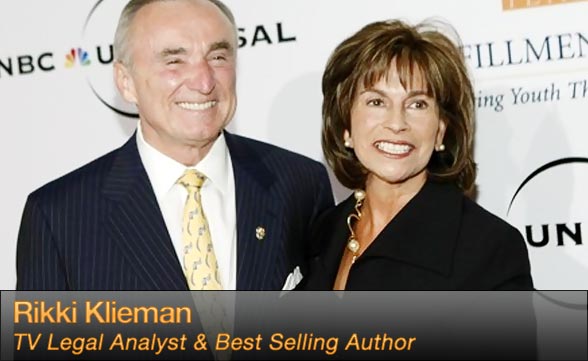