In January 2008, in a Michigan courtroom, a jury, in a gesture considered extremely rare in American Courtroom procedure… had the courage and the compassion to offer an apology on Behalf of the State of Michigan to 10 Michigan women prisoners, for the years and years of rape, torture, tyranny, and retaliation these women were forced to endure in Michigan prisons.

Each member of the jury stood before the women in open court and publically apologized to them for the abuse they endured while incarcerated. The guilty prison administrators had already left the courtroom and were not present when the jury did what these defendants refused to do: “apologize for the harm inflicted”.

This 2008 landmark case eventually resulted in a July 2009 settlement against the , Department of Corrections for the State of Michigan (DOC) wherein they agreed pay $100 million dollars as compensation to end 13 years of litigation with about 500 current and former female inmates in Michigan’s prison system who alleged that the male officers raped, sexually assaulted and harassed them and had engaged in a widespread practice of cross gender pat downs, touching, privacy violations and systemic and aggressive retaliation imposed on those women.

The Detroit News found in their own investigation, that Michigan lawmakers and prison officials regularly interfered and blocked investigations of sexual abuse in women’s prisons, stifled inmate complaints and stripped away the rights of assaulted prisoners to sue for damages.
The problem was compounded by the low priority given to the prosecution of guards charged with sexually abusing prisoners… And that the responsibility for doing so was increasingly left to the Attorney General’s Office…..which was the very same agency fighting the lawsuits against the department by women victimized by these same guards.

Legislators took away inmates’ right to sue under Michigan’s Civil Rights Act in 1999. That year, they also changed the law to require prisoners to prove lasting physical injury from an assault to obtain damages in court. “By stripping imprisoned women of this basic civil right…. the state emboldened sexual predators who were attracted to prison work,”

In the United States, sexual abuse by guards in women’s prisons is so notorious and widespread that it has been described as “an institutionalized component of punishment behind prison walls.”

It took enormous courage for women to speak out because when they did there was retaliation from the guards. During the course of litigation, the Michigan Department of Corrections agreed to various corrective court orders which eliminated much of the offensive cross gender pat downs, privacy violations and protected those women who complained about officer misconduct.

Amazingly, a Detroit News investigation found that the Michigan Corrections Department has left staffers with criminal backgrounds or multiple complaints of sexual abuse on the job for years. In 2009, former Governor Jennifer Granholm ordered the men permanently out of the female residential units.

The story of how this case developed, was litigated and was eventually resolved over 13 years is historic and is a testament to the fact that good civil rights lawyers can make a difference in the lives of many whose rights are under attack by governmental authority.

Human Rights Watch, Amnesty International, The United Nations and the United States Department of Justice eventually documented the systemic nature of the unlawful conditions, and the DOC’s complicity in creating and perpetuating the hostile prison environment,

The conclusions of these investigations were a powerful indictment of the Michigan Department of Correction’s role in fostering the unlawful prison conditions and covering up the crimes of its male officers, and a powerful rejection of former Governor Engler’s failure to protect Michigan’s citizens.

Prisons owe an affirmative legal duty to protect their inmates against abuse. Congress and forty-four states have criminalized all sexual contact between guards and prisoners, regardless of consent.

In this INSIDER EXCLUSIVE Investigative Special, we “Go Behind the Headlines” in Prison Abuse – Michigan Prisons Scandal to meet with Michael Pitt, & Cary McGehee , partners at Pitt McGehee Palmer Rivers & Golden who were two of a team of ten of Michigan’s top civil rights trial lawyers who successfully tried the cases of these raped and sexually assaulted current and former female inmates.

Joan Yukins, a former Prison Warden of one of the admitted at trial that she was fully aware of the sexually hostile prison conditions from 1993 to 1998 described by Human Rights Watch as “torture” yet did nothing to curb the massive abuses and thereby preventing the injuries to the women inmates.

After three weeks of testimony from the ten women, former DOC employees and esteemed prison condition and mental health experts, a jury of seven women and three men returned verdicts in favor of all the women and against the DOC and prison administrators.

The verdicts ranged from $335,000 and $3.6 million. Total damages awarded exceeded $15 million with six women receiving more than $1m each. With interest and court awarded attorney fees, the judgment was worth more than $42m. This was a momentous occasion for everyone in the courtroom. The women, their lawyers, the members of the public and even the trial judge were moved to tears by this display of humanity and decency.

As a result of the efforts of these lawyers, the unspeakable crimes occurring inside Michigan’s female prisons have been essentially eliminated. More than thirty-five men have been successfully criminally prosecuted for their crimes.

Mike and Cary have earned the highest respect from citizens and lawyers alike…. as some of the best Civil Rights Trial lawyers in Michigan….. and in the nation. They have seen “How the state turned its back on our mothers, sisters and daughters at a time when they are most vulnerable and unable to protect themselves from the men the state hired to oversee them.”

They understand that Prison abuse is one of the most serious, enduring, and divisive human rights violations in the United States. The problem is not just in Michigan…But nationwide….And its nature is institutionalized. …And because of that…..They are driven to fight for people who had been harmed by the willful or negligent actions of others. Because they never want another innocent victim to be tortured, raped, or sexually assaulted again in a prison.

“No one…. no one in this country….And no one in a civilized society deserves to be sentenced to be raped and assaulted in prison” like the Michigan Prison guards did to Jennifer Pruitt seen here testifying, in open court, to the daily torture she endured …Starting when she was just seventeen years old ….. 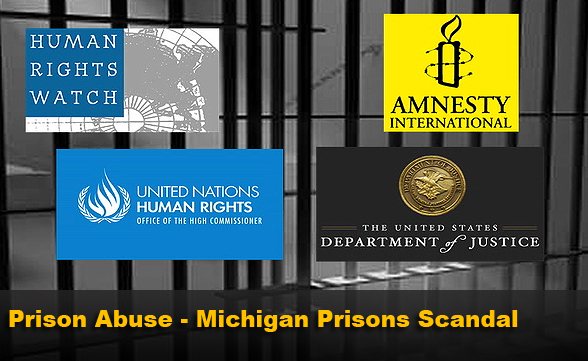