President Barack Obama regularly referred to his home state of Hawaii as a big, harmonious community, where he was born and spent his boyhood and adolescence. In fact, his Hawaiian background is, in many ways, a key to understanding who he really is.

There are other important parts of Obama’s past that also provide insight into his values and his modus operandi, but Obama says the “aloha spirit” remains his personal and political inspiration. He stated that “I do think that the multicultural nature of Hawaii helped teach me how to appreciate and navigate different cultures out of necessity.

Obama’s friends and associates say his upbringing in Hawaii is much closer to the experience of everyday, middle-class Americans. Even though he stood out, Obama seemed to fit in happily with his peers. Teachers and friends from that era say he was affable and good-natured and never showed the inner turmoil that he wrote about in his memoir, ‘Dreams from My Father’.

He was born in Hawaii on Aug. 4, 1961, to a Kenyan father, Barack Hussein Obama, for whom he was named, and Dunham, a Caucasian woman from Kansas. They met while students at the University of Hawaii. The couple eventually divorced, and his mother remarried. The family moved to Jakarta for a while, then they moved back to Hawaii with Barack and his half-sister.

IN THIS INSIDER EXCLUSIVE NETWORK TV SPECIAL, “Obama Hawaiian Africana Museum” our News team is on location in Honolulu meeting with, Deloris Guttman, the Museum Director, and her colleagues who will share its history, its purpose, and how you can help them achieve their goals.

Their mission is teaching Hawaii schoolchildren in pre-K to 12th grade about diversity and the history of people of African descent in Hawaii, and to establish a permanent home for their museum.

Deloris served on the committee that in 2014 submitted a proposal for a Barack Obama presidential library in Honolulu, and is now seeking a permanent home for her nonprofit museum, originally founded as the African American Diversity Cultural Center Hawaii in 1997. For a possible permanent site, they are looking at places where Obama lived. 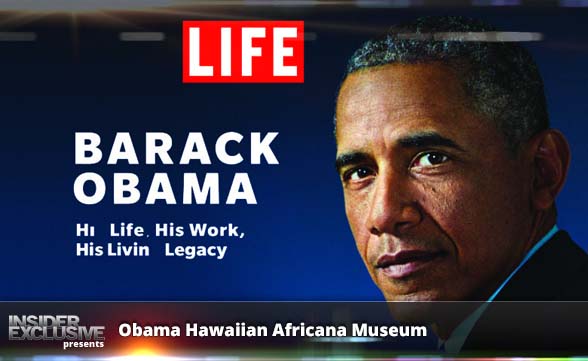