There is a journey some of us must take in our lives out of necessity. It’s a lonely and dangerous journey, filled with fear and anxiety, but one we cannot refuse, no matter how much we wished we could.

It is a journey into the unknown, and we fear it may change our lives forever. Because that journey, that road, often sets the tone and purpose of the rest of our lives.

That journey is ‘The road we sought to Avoid because it becomes our Destiny’.

And It’s that same road that Maralee McLean has been traveling on her journey, her road, and her destiny, for over 30 years, as a Child advocate, Domestic Violence expert, national professional speaker, and author of “PROSECUTED BUT NOT SILENCED: Courtroom Reform for Sexually Abused Children.

She is currently the Executive Director of “Moms Fight Back”, (MFB) 501c4 which is an organization focused on legislation and the protection of women and children from domestic violence, child abuse, child sexual abuse, coercive control and trauma where are family courts are failing. They are working on legislation that will be effective in all states within the U.S. and that’s why they need your help to duplicate and implement these protective laws in all 50 states.

Maralee’s story is the true story of loving mother, who fought for her daughter, who was horribly abused over her entire childhood by her father who fooled everyone.

The entire family court system including the judge, and corrupt therapists accepted and endorsed the debunked the theory of parental alienation disorder (PAD or PAS as it is known) that is now “not recognized” in any medical or psychological publication and is rejected by the American Psychiatric Association.

In many cases, the corrupt family court system of judges, court-appointed investigators and therapists used their “Richard Gardner Playbook” to destroy families and children’s lives without any regard for the welfare of the children. This is not true of all judges and cases, but is all too prevalent in this country.

58,000 children a year are taken from a nurturing parent and forced to live with their abuser. Every day in the U.S., protective parents—the vast majority being women—find themselves on trial for attempting to defend their abused children.

Maralee’s passion for advocacy developed through living a mother’s worst nightmare. Fighting the system with body and soul, she gained the insight that this was not her nightmare alone.

So, as Executive Director of “Moms Fight Back”, she organized a National Rally of Mothers at the Colorado State Capitol and has been involved in legislative work that spans over two decades, like “Julie’s Law”

She testified before Congress to promote judicial accountability to better protect sexually abused children’s rights in our courts. Maralee’s story has been covered by many media outlets and internationally on CNN.

Today, the Insider Exclusive’s “Justice in America” news team is on location in Colorado, filming this new Network TV Special, “MOMS FIGHT BACK – Maralee McLean’s Story” featuring Maralee as she tells her story… her personal journey of justice for herself and the thousands of other mothers she’s helped over the years ….. It became a journey on road she never imagined……Her own Destiny.

CNN captured just the beginning of Maralee’s journey to justice and our news team is here today to see how one ‘fighting’ woman turned her own personal story for justice into an amazing advocacy for other women and legislative reform to protect all children. 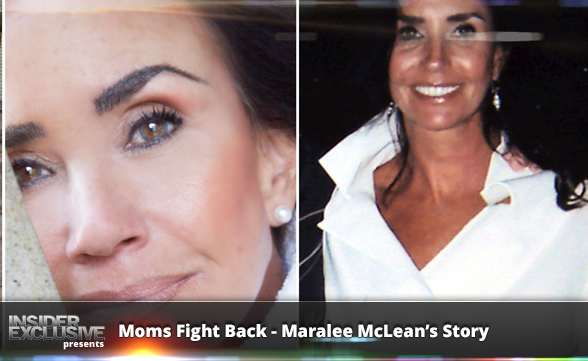