In this Insider Exclusive, “Justice in America” Network TV Special, “MICHIGAN ASBESTOS COVER-UP”, our news team is on location in East Lansing, Michigan, with victims of the City of East Lansing, Michigan Water Treatment Plant, and their lawyers Neal Wilensky and Kelley Collett of the Neal J. Wilensky Law to report on how their employer deliberately and willfully exposed these employees to extremely dangerous conditions knowing full well that serious injuries would be suffered by these dedicated, hardworking employees.

Not only did Asbestos manufacturers lie and coverup about the dangers of asbestos exposure, … But so did this employer The City of East Lansing, Michigan Water Treatment Plant.

Nine employees and former employees of the city’s wastewater treatment plant sued the city, stating they were repeatedly exposed to mercury and asbestos, and the city delayed notification of that exposure for 7 years….

The city was aware of the potential dangerous asbestos exposure in their facility and hired a contractor, Fiber-Tec, in 2006 to conduct a thorough study.

Fiber-Tec provided a detailed report to the management of the City of East Lansing in February of 2007. The study found 81 locations where asbestos was present throughout the waste water treatment plant. And they recommended immediate notification of the employees.

But the employees were never notified…. Not until 7 years later in February 2014. And as a result, the City deliberately and maliciously exposed workers to dangerous asbestos over a period of seven years. This amounts to over 14,000 work hours.

The latency period to develop asbestosis is approximately twenty years. Several employees have already experienced significant breathing issues. The knowledge that you might develop a serious medical condition, asbestosis, because of the willful acts of their employer is very disturbing.

In recent years, the city of East Lansing has been cited twice for violations by Michigan OSHA. That includes one time for safety violations related to both the presence of asbestos and the mercury spill, and another time for failure to correct previous violations.

At the time of the filming of this TV show, the case was on appeal at the Michigan State court of appeals, which unfortunately last week ruled that the plaintiffs in this case did not meet Michigan’s legislated standard for “exemption for intentional torts”, to that rule of ‘governmental immunity’ as a cause of action against the government, despite the fact that the government concealed the 2007 Asbestos Exposure conditions from the victimized employees for 7 years and 14,000 hours of exposure. Now their only claim for health-related injuries will be for Workers’ compensation, which is the system used to provide wage replacement, medical, and rehabilitation benefits to workers who suffer a work-related injury. The State of Michigan does not ordinarily pay workers’ compensation benefits. 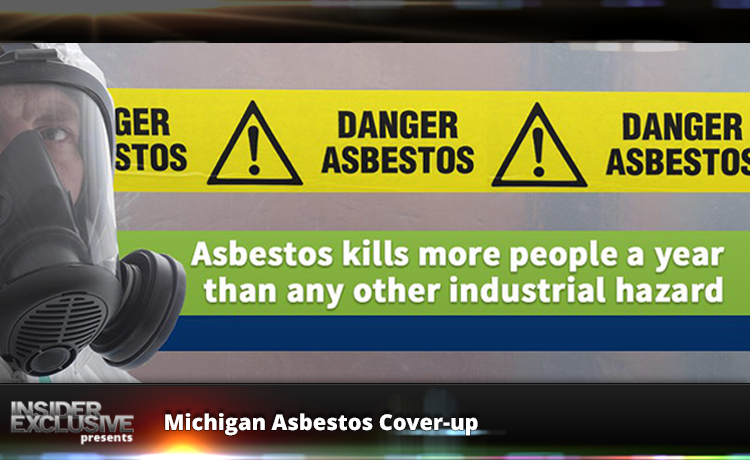