Headline Civil Rights News: Whistleblower Lawsuits and the Los Angeles DWP. Patricia and Sandra Miranda, Candido Marez and Luciano Yi (along with Maria Vizcarra, Osama Mukahal, Andre Smart-Bey and Silvia Valdez) discuss allegedly unethical management and hostile treatment of employees at the Los Angeles DWP. Sandra’s lawsuit alleges she was threatened with disciplinary action because she was successful in getting DWP to cancel a contract with Empire, a janitorial supplies company. She complained about the nature of this contract and alleged mistreatment of custodians starting in 2003. Candido is a longtime vendor for the City of Los Angeles and DWP, who also supported Sandra’s action and himself allegedly suffered mistreatment and retaliation for having exposed this contract and the way small competitors were being squeezed out of business dealings with DWP. Luciano also openly criticized the Empire contract, reported safety violations and assisted Sandra in buying products from vendors other than Empire, which resulted in his termination.

Patricia J. Barry is a superb trial attorney with a distinguished career in the fields of civil rights, women’s rights and workplace freedom. She argued the first case concerning sexual harassment before the United States Supreme Court, resulting in a unanimous decision that ruled such behavior illegal. Patricia holds a law degree from UCLA. 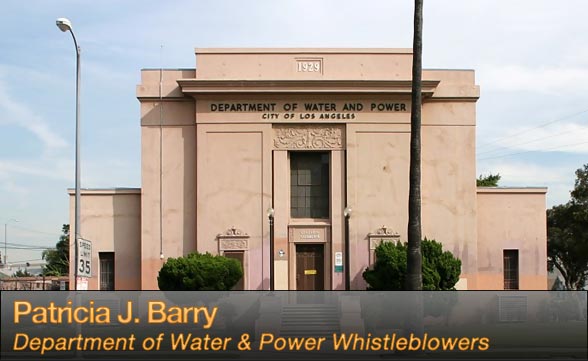