In this Insider Exclusive Investigative Network TV Special, our news team goes on location in Baton Rouge, Louisiana, to visit with Dr Rushing, as he tells Kafkaesque story in JUSTICE IN AMERICA – Louisiana’s Kangaroo Court Story of Dr Stephen Rushing.

“Logic may indeed be unshakeable, but it cannot withstand a man who is determined to live. Where was the judge he had never seen? Where was the High Court he had never reached? He raised his hands and spread out all his fingers. But the hands of one of the men closed round his throat, just as the other drove the knife deep into his heart and turned it twice.” ~ Franz Kafka, ‘The Trial’

In a bizarre 15 year journey to get “justice,” Dr. Stephen Rushing, a tenured Professor at Southeastern Louisiana University, has experienced a real life legal nightmare situation that is incomprehensibly complex, bizarre, and illogical. It’s straight from the “Twilight Zone”

In 1998 Dr. Stephen Rushing filed multiple complaints against faculty, staff, and administrators as allowed by policies approved by the University of Louisiana System governing board.

Allegations included unfair treatment to members of the creative and performing arts when distributing grant monies, doctoring of Research and Grants Committee minutes, incompetence, and denial of due process to name a few. He was never allowed to file these grievances.

The Grievance Committee required a list of the policies that had been violated. When Dr Rushing told them what the violations were, the grievance committee determined that the Southeastern Louisiana University grievance procedure did not allow official actions of committees to be questioned.

Actually, as Dr Rushing relates…. this sounds just like a Kangaroo Court, in which the Grievance Committee blatantly disregarded recognized standards of law or justice, and their own rules! The university retaliated against Dr. Rushing twice placing him on leave with nominal and without pay, denying him the right to due process, denying him the right to teach his classes and grade his students, and denying him access to the grievance process (a primary means of shared governance, freedom of speech, and a prerequisite to filing suit), banning him from the university. The leave lasted a total of 10 months.

This story gets worse….much worse….because it went on and on… over 10 years…as Dr Rushing will share his legal nightmare. So why go through so much trouble to deny this professor due process and freedom of speech and access to the court system?

Could it be, as Dr Rushing states, that evidence exists to prove that in January 2000 then University of Louisiana System President Bobby Jindal rejected grievances and requests for investigations sent by Dr Rushing; that Jindal returned the professor’s certified mail marked “refused”!

Could it be that politics was involved? Is this proof that Louisiana, as Dr Rushing states, is still the northern-most banana republic in the Americas? You can determine that yourself in this new Network TV Special.

One of Kafka’s most famous novels, The Trial, tells the story of Josef K., an ordinary middle manager who one morning awakes to find himself accused of a terrible crime – a crime which is too awful for his accusers to speak of. While at times absurdly funny, The Trial is ultimately a frightening depiction of what it means to live under a regime which operates on a circular logic that prevents outsiders, including those subject to its rule, from understanding – let alone challenging – the rules of the game, and who is making them.

The problems captured by the Kafka metaphor…are as real today in the American judicial system as they are in fiction. They affect the power relationships between people and the institutions of the modern state. They not only frustrate the individual by creating a sense of helplessness and powerlessness, but they also affect social structure by altering the kind of relationships people have with the institutions that make important decisions about their lives.

Justice is itself the great standing policy of civil society; and any eminent departure from it, under any circumstances, lies under the suspicion of being no policy at all. Justice is a desire for equality and fairness, the assurance of justice is always a prerequisite for a good society.

Dr Rushing’s story is a story of unimaginable frustration, suffering, and great wrongs, but it’s also a story of his courage and faith and the dauntlessness of his human spirit to continue to seek justice for himself and others.

You can contact Dr Stephen Rushing by visiting his http://www.southeastern.edu/ 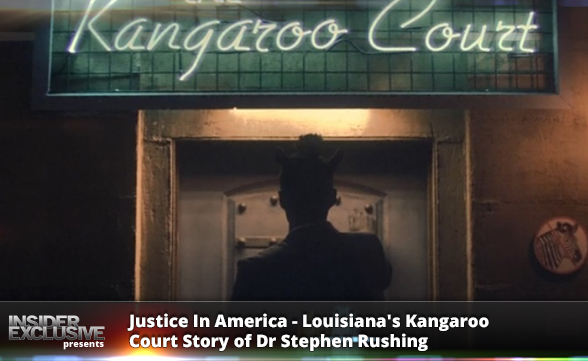