Everyday in this country, grieving families spend thousands of dollars on funerals, cremations and burials. They often have to make decisions quickly, at a difficult time, without doing much research or reading the fine print on contracts.

And while the bereaved may believe they’re dealing with mom-and-pop operations that have been in the community for many years….. a lot of funeral homes and cemeteries these days are owned by big corporations, part of a multibillion dollar industry known as the “death-care” business.

The nation’s graveyards are a lucrative and little-noticed part of the industry. Most of the time they’re every bit as orderly and peaceful as they seem. But when things go wrong, they can go…. very wrong, for many years, without anyone noticing. And for the families involved, it can be a nightmare.

After years of covering scams, shams and other rip-offs, the Insider Exclusive News team finds that taking advantage of someone who is mourning the loss of a loved one and who may be very distressed has to be the most heartless of scams.

There are more than 40,000 active cemeteries in this country, from small churchyards to sprawling memorial parks owned by big corporations. We think of them as spiritual places, sacred ground.

Now, The Federal Trade Commission enforces what is known as the Funeral Rule, which protects consumers’ rights when it comes to all transactions related to funeral arrangements, ranging from price comparison to memorial services. Not only is this rule not well known among consumers, the FTC found that one in four funeral homes are in violation of this rule. Under that consumer bill of rights, funeral homes are required to provide their customers with a clear price list and other disclosures. Those rules, however, generally don’t apply to cemeteries.

York Memorial Cemetery may look like a local operation, but in 2006 it was owned by Service Corporation International, or SCI, the largest provider of funeral homes and cemeteries in North America. SCI is known by the brand “Dignity Memorial”

WHO IS SCI/DIGNITY? Service Corporation International is a $3.8 billion company that commands approximately 13 percent of the market share in the funeral industry. Founded in 1962, SCI has grown into a company with 1,423 funeral service locations and 374 cemeteries (including 214 funeral service/cemetery combination locations) in North America.

SCI’s History is Filled With Legal Controversy, and Alleged Misconduct:

On Feb. 4, 2011, the Nashville Post reported that a local woman filed a $16 million lawsuit against an SCI funeral home for allegedly botching her husband’s burial arrangements in December 2010.

On Nov. 24, 2010, JewishJournal.com reported that a Los Angeles judge determined that SCI intentionally tampered with and destroyed evidence related to a class action lawsuit against Eden Memorial Park in Mission Hills, California, alleging that its employees mishandled human remains.

On Oct. 20, 2010, the Daily Camera in Boulder, Colorado, reported on a family’s lawsuit against SCI-owned and operated Crist Mortuary in Boulder for employees allegedly dropping the casket of their 20-year-old son on the day of his funeral and letting the body roll onto the pavement.

On Sept. 15, 2009, the Los Angeles Times reported that in 2003, the State of Florida filed criminal charges against SCI, one of its vice presidents and a company superintendent.

The Florida attorney general specifically charged that the cemetery used backhoes and heavy equipment to demolish vaults, caskets and remains because the same plot had been sold twice; scattered remains in a field of wild hogs; and dug single plots twice as deep to ‘bunk bed’ the deceased.

The article states that the company paid more than $100 million in settlements with families, according to a news release from SCI.

On April 5, 2009, the Washington Post reported that former employees of the SCI-owned National Funeral Home in Fairfax County, Virginia, alleged the funeral home was storing naked bodies in various stages of decomposition in conditions described to the newspaper as “disgusting, degrading and humiliating.”

In May 14, 2004, the Austin Chronicle reported on an SCI investigation being conducted by the Texas Funeral Service Commission into the company’s alleged involvement in illegal embalmings being performed in Texas.

On Nov. 18, 1999, the New York Times reported on an out-of-court settlement in lieu of antitrust charges between the New York attorney general’s office and SCI.

Today the INSIDER EXCLUSIVE “Goes Behind The Headlines” in “JUSTICE IN AMERICA – FUNERAL FRAUD INVESTIGATION ….. to examine how Pamela Hunter, Law Office of Pamela A. Hunter and Clifton Cannon, Gaston Legal Clinic are representing several families in their legal battle to seek justice against York Memorial Cemetery, which is owned by Service International Corporation.

Pam Hunter and Cliff Cannon have earned the highest respect from citizens and lawyers alike…. as some of the best Trial lawyers in Charlotte…. In North Carolina….. and across America

Their goals….. Not ONLY To get Justice for their clients…but to make sure that everyone is treated with equal respect and dignity as guaranteed under the Constitution of the United States.

They have built substantial reputations by consistently winning cases other law firms have turned down. Their amazing courtroom skills and headline grabbing success rate continue to provide their clients with the results they need……And the results they deserve. 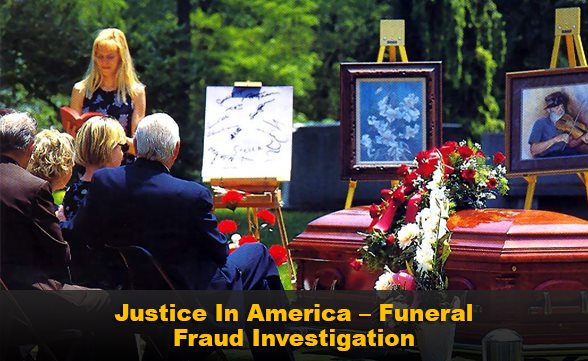