The timeless stories contained in Aesop’s Fables contain simple and succinct morals which would benefit many people today in the world of business. They also play an important role in highlighting and demonstrating character traits. For centuries, fables served the crucial role of communicating a shared history, reinforcing a culture’s values and calling attention to important traditions.

Fables can also help us clearly see human shortcomings that might not be as easy to recognize if the characters are human. Almost 2,500 years ago, Aesop, told the story of The Scorpion and The Frog which is the basis of this modern-day Insider Exclusive “Justice in America” Network TV Special.

2,500 years later in 1968, Al Wilson, sang this same morality tale in his smash hit, “The Snake” which also tells that same tale of partnerships that go wrong. Here is a rare rendition of Al singing his major hit almost 2,000 years after Aesop’s fable, “The Scorpion and The Frog”

In the business world, there are snakes and scorpions galore ….as seemingly intelligent and capable adults abandon all reasonable codes of conduct and engage in behavior that is both vindictive and self-destructive. Over the years, Bill Broadfoot, has witnessed this behavior in numerous cases.

IN THIS INSIDER EXCLUSIVE NETWORK TV SPECIAL, “JUSTICE IN AMERICA – Aesop’s The Scorpion & The Frog” ”, our news team visits with Bill Broadfoot, a lawyer in Atlanta, Georgia, who has a modern real life legal case version of “The Snake” and “The Scorpion and The Frog “ as he explains how business partnerships can and do mirror the morality stories of over 2,500 years ago.

Bill’s message to everyone….” When your scorpion partner is on a path of self-destruction, stay on the high road, wait for your day in court and remember the story of the Heifer and the Ox which teaches us that, “He who laughs last, laughs best.” 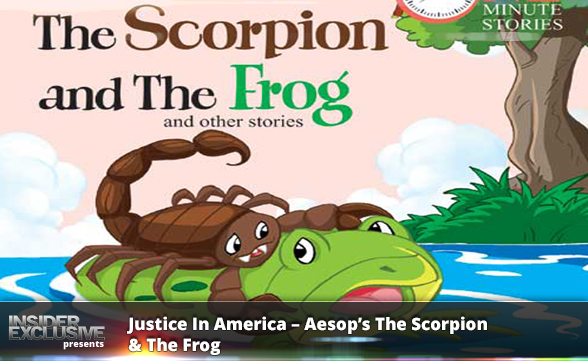 Justice In America – Aesop’s The Scorpion & The Frog