In 1997, Howard University Law Professor Dawn Martin was stalked on campus by a delusional serial stalker, Leonard Harrison. Despite instructions to Howard University from the Washington D.C. Police Department to implement and improve its campus security, Howard failed to take action, and instead, punished Professor Martin by refusing to renew her teaching contract. The story you are about to watch is the true story of Dawn Martin’s 11-year Journey for Justice for her and all women who are stalked in the workplace. The National Organization for Women and The National Association of Women Lawyers join her cause.

When Prof. Martin was stalked by Leonard Harrison, he was searching for the physical embodiment of his “fantasy” wife — a fictional female character in a book, written by the renowned civil rights Professor, Derrick Bell. Instead of following its own security procedures to ban Harrison from campus, Howard responded to Prof. Martin’s requests for protection by refusing to renew her teaching contract. She sued Howard, under Title VII of the Civil Rights Act of 1964, which prohibits discrimination and harassment, on the basis of sex/gender. Prof. Martin alleged that Howard permitted the stalker to harass her on the basis of her gender in her workplace. 78% of stalking victims are women. 54% of female murder victims reported their stalkers to the police before being killed by them. Prof. Martin further alleged that Howard retaliated against her by refusing to renew her teaching contract because she asked for protection from Harrison on campus.

The National Organization for Women (NOW) and the National Association of Women Lawyers (NAWL), joined by additional women’s and victims’ advocacy groups, filed an Amicus Brief in this case, stressing the need to protect stalking victims from employer retaliation. In this powerful TV documentary, Prof. Martin is joined by such esteemed leaders as Kim Gandy (President of NOW); Prof. Derrick Bell, a renowned civil rights leader and university professor; Roberta Wright, who wrote amicus briefs for NOW and NAWL; and Amos Sirleaf, a former Howard University Security Officer.

The Law Offices of Dawn V. Martin represents plaintiffs in civil rights, employment discrimination and personal injury/tort cases. The firm litigates to enforce the rights of employees who have been discriminated against on the basis of race, sex, national origin, religion, age or disability. Ms. Martin has also been featured on Sky Radio as part of its series on ¡°Salute to Women in Leadership,¡± as noted in TIME Magazine. 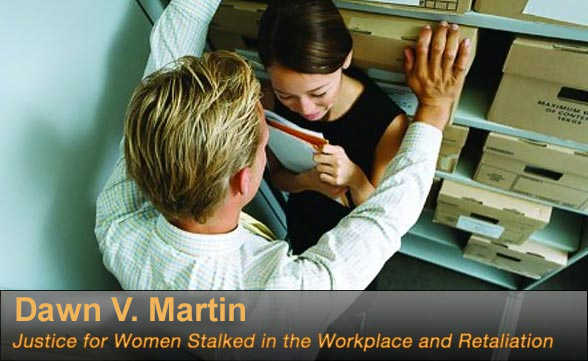 Justice For Women Stalked In The Workplace And Retaliation