The Law Offices of Allred, Maroko & Goldberg and the Law Offices of Davis & Gavsie, PLC. are featured in an exciting, exclusive, in-depth and inside interview, discussing “sexual harassment in the workplace.”

Nathan Goldberg and Roxanne Davis, both of whom represent Mr. Stevens, discuss his case against Vons supermarkets. Joining them is Mike Lief, who served as the jury foreman in the trial James brought against Vons. James was employed by Vons for 26 years as an Inventory Control Clerk. After complaining to management about ongoing sexual harassment by a female supervisor, he was transferred to a less desirable store. Mr. Stevens filed a complaint with the California Department of Fair Employment and Housing (DFEH). Vons allegedly lied to the DFEH, and the DFEH closed its file. The company then allegedly falsely accused Mr. Stevens of donating water and soda to a church that fed the homeless and fired him. On October 27, 2006, after a 6-week trial, the jury in Simi Valley awarded Mr. Stevens $1.67 million in compensatory damages and over $16 million in punitive damages. The case has been appealed by Vons.

Roxanne A. Davis has been practicing in Los Angeles, California, specializing in labor and employment law, for over 17 years. She obtained her B.A. from New York University with honors. She received her J.D. from the University of Southern California Law Center and M.A. in International Relations from the University of Southern California. Roxanne is admitted to practice law in state and federal California courts. She spent 5 years of her career working as an attorney with one of the largest labor and employment law firms in the country representing management, Jackson, Lewis, Schnitzler & Krupman. Over 13 years ago, she established her own practice in which she represents individuals and employers, in matters involving wrongful termination, discrimination and sexual harassment, among other issues. The varied demands of her practice include litigating claims of wrongful discharge, unlawful harassment, discrimination, wage and hour issues, mediation, negotiating employment contracts and separation agreements and more.

Nathan Goldberg, a partner at Allred, Maroko & Goldberg, graduated summa cum laude from Loyola Law School in 1974. He has been named one of the top 100 Southern California “SuperLawyers” by Law & Politics and Los Angeles Magazine every year since 2004. In addition, he has been recognized by LawDragon magazine as one of the 500 leading plaintiff’s lawyers in America. Nathan has a broad range of trial experience in state and federal court. Nathan was also lead trial counsel in both the case of Adams v. Los Angeles Unified School District (2002) and the case of Salama v. King Drew Medical Center (2000). Each of these trials resulted in a jury award well in excess of $4 million. 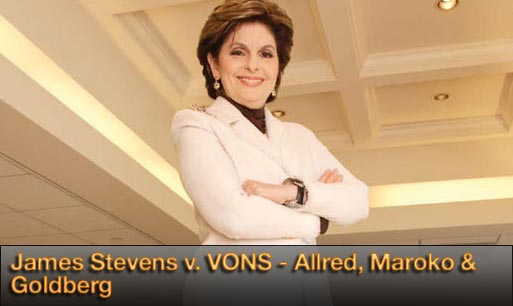