Since 1994, they have successfully been involved in many significant mergers and acquisitions of companies that all required detailed financial and legal analysis.

Having completed numerous turnarounds of businesses with operations in North America and Europe, they are proven specialists in the acquisition and restructuring of distressed companies. They are experts at what they do!

In 2012, Neal and Darren retained Michigan based law firm, Jaffe Raitt Heuer & Weiss PC for legal advice. For the purchase of a manufacturing company called LSI Corporation of America, Inc. for the pair’s holding company SSL Assets LLC. Jeffrey Weiss, one of the firm’s partners, was the lead attorney in this matter for Jaffe.

Neil and Darren wanted to get the absolute assurance from Jaffe, that they would not be held personally liable for any issues relevant to the company’s unfunded pension liability tied to the acquisition.

Based on their long successful business experience, Neal and Darren know that these complex business transactions need legal expertise from law firms to ensure that all due diligence on any pending financial investments are fully disclosed and vetted. It’s a mandatory prerequisite.

But as a Federal Court jury concluded in 2017, Jaffe’s and Jeffrey Weiss’s advice were absolutely wrong because the Jaffe lawyers failed to perform the necessary pension liability analysis…… And as a result of the acquisition, Neal and Darren’s company, SSL Assets, became obligated to pay LSI’s pension liability when LSI ceased operations.

The Jury concluded that Jaffee breached its duty of care in providing legal advice and awarded a $5 million verdict against Jaffe Raitt Heuer & Weiss PC for legal malpractice for failing to properly vet a client’s pension liability prior to an acquisition.

In this new Insider Exclusive, Justice in America, Network TV Special, “BOMBSHELL” $ 5 MILLION Verdict for “LEGAL MALPRACTICE” against Jaffe, Raitt, Heuer & Weiss Law” & Why their “Legal Advice” was so Bad”

Our news team is on location with Jeffrey Goulder, Partner Stinson Leonard Street LLP in Phoenix Arizona to get the complete story of how he successfully represented Neal Cohen and Darren McKenzie Chaffee. and the current status of the case. 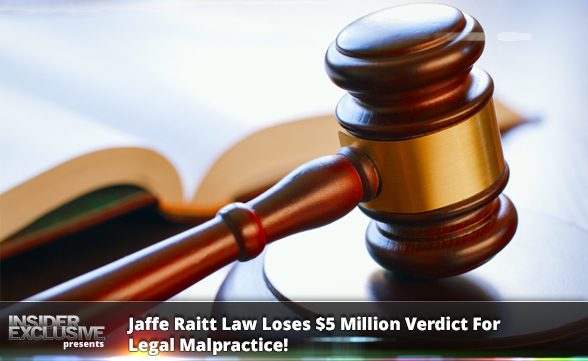