Prosecutors… And Cops…. are Sworn to Protect and Uphold the Law…. Follow the Rules…. When they don’t…… When they lie, hide and destroy evidence, and basically “don’t follow the rules”.

They destroy the lives and careers of courageous and decorated police detectives, like Former Florence, Arizona police Detectives Hondo Hunter, and Jarris Varnrobinson Vonzombie because they insisted on getting to the truth in three heinous crimes, which were being covered up, in the small city of Florence, Arizona These were whistle-blowers and decorated cops endured retaliation, and were eventually fired.

Between 2007 and 2012, Hunter and Vonzombie reported their former Police Lieutenant Terry Tryon’s coverup of these felonies to assist his son and his associates. This led the new police chief, to fire them on trumped-up charges.

On Oct 1, 2018, a federal judge ruled that the two former Florence police detectives’ claims…. that they suffered First Amendment retaliation and conspiracy from several present and former town officials and employees could proceed to trial.

Seven years after the Florence Police Dept fired these two decorated police detectives, and over five years after the filing of their lawsuit, the defendants have appealed to the U.S. Court of Appeals for the Ninth Circuit. The oral arguments were argued on February 4, 2020.

In their lawsuit they challenged the racist and corrupt Florence police department of which they were once a part and how the Dept compromised Public Safety.

Our news team visits with Lynne Bernabei, Founding Ptr, Bernabei @ Kabat, Pete Whelan, and Erwin Chemerinsky, Dean of UC Berkeley Law, and the Appellate Attorney, as well as Hondo Hunter and Jarris Varnrobinson Vonzombie to discuss the unique aspects of this case, the legal challenges ahead, and the current struggle against racism and cronyism going on in Florence, Arizona and across the country. 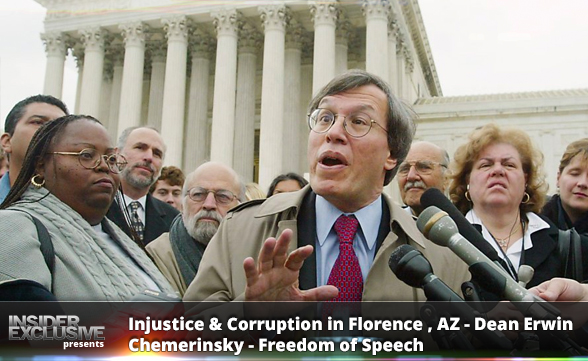