In contrast to her tough persona, Cristina doesn’t wear “rubber gloves” in her courtroom. She has the unique ability to connect with her litigants on a very warm and personal level by sharing her wisdom, cultural background and moral beliefs with everyone who stands before her.

“Cristina’s Court” consists of numerous small claims cases but focus on conflicts and legal arguments between families, couples and other relationships in turmoil, including friends, business partners and co-workers. Cristina hears cases ranging from ex-lovers fighting over possessions to an irresponsible teen who has stolen from his or her parents. Viewers will quickly see that Cristina, by nature, pours herself into each and every story, as she expertly weaves through the cases looking for the facts, providing direction, counsel and resolution in both an informative and authoritative manner. In addition to championing her legally binding judgments, Cristina simultaneously injects her moral principles and deep-rooted family values into all of her rulings.

The daughter of Colombian immigrants, Cristina was born in New York, NY. She lived in all types of places from one of the poorest neighborhoods of New York, to the big city of Guadalajara, Mexico, to the border town of San Ysidro, California to Hartford, Connecticut, and then to California, which she has now called home for over twenty years.

Growing up, Cristina was exposed to all walks of life, cultures, and differing problems facing each community. She watched her parents struggle with racism, finances, and adapting to the U.S. culture with a foreign language. Cristina learned to speak English around the age of 10 and today has mastered both languages. With her unique and well-rounded background, Cristina credits her family’s example and desire to remain close to her heritage and culture for all of her personal and professional achievements.

Today, she and her family are living out the American Dream. With her parents’ examples to follow, it is easy then to understand her passion for community awareness, the practice of law and most of all, for reaching out to all types of people and from all cultures and guiding them toward their own dreams.

Cristina is a leader in the community and is committed to community awareness. Cristina has worked to make a difference in her community at every scale. She is an active member and leader of several community and legal organizations.

Cristina frequently lectures and speaks at seminars sponsored by public/community associations, law schools and professional organizations. She is also frequently featured on radio and television. Cristina serves as a weekly Attorney Co-Host on Radio UNIVISION in LA, CA.

In 2005, Cristina was selected as one of California’s “Woman of the Year” for her community activities and was named one of America’s top 10 “Latina Advocates,” for making the world a better place for women and Latino’s rights by the national magazine LATINO LEADERS (National Magazine of the Successful American Latino).

“Living by Los Dichos”, her first a collection of key life lessons Cristina learned from her family and continues to apply to her personal and professional life, is a popular bestseller available in all bookstores.

Overall, Cristina has worked to make a difference in her community, unknowingly breaking through the stereotypes and misconceptions of what a woman is or should be. Cristina is a powerful role model for young people in any community. Not only has she excelled in two demanding fields, but she has utilized her skills to advocate for many who have no access to justice.

“Cristina’s Court” is exclusively distributed throughout the U.S. by Twentieth Television. 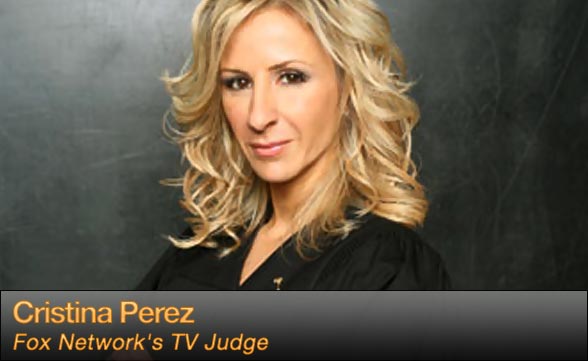