Riddell is responsible for $3.1 million, or 27 percent of $11.5 million in damages that were awarded to 22 year old Rhett Ridolfi…. who sustained a head injury at Trinidad High School, in Colorado… and was paralyzed on the left side of his body during a football drill in 2008 .

At a time of rising anxiety about the dangers of brain injury in football…. justice is bearing down on Riddell…. as if the country’s largest helmet manufacturer were a punt returner without any blockers. Riddell is the country’s largest manufacturer of football helmets. Although many people have tried to sue similar companies that make helmets in the past…. few people have won these lawsuits. Unfortunately for Riddell, hundreds of other similar cases are currently pending against them.

Currently Riddell and the N.F.L. are being sued by more than 4,000 retired players and their spouses….. Claiming that the both the league and Riddell knew about the long-term health risks associated with repeated concussions and head trauma. Making matters more complicated, the private-equity owner of Riddell’s parent company has reportedly decided….. to put the company up for sale.

Easton-Bell Sports, which makes Riddell helmets for the National Football League and other equipment for the National Hockey League, is being prepared for a sale ….by its private equity owner, in a deal that could fetch as much as $900 million. Most helmet manufacturers follow safety standards set by the National Operating Committee on Standards for Athletic Equipment. Critics have accused the industry-supported association for not setting more rigorous safety standards and having too many conflicts of interest to be considered unbiased.

After years of denial, the NFL has conceded that medical research shows a connection between repeated head injuries and degenerative brain disease. More than a decade ago, the sports equipment manufacturer Riddell was developing a highly anticipated new football helmet designed to reduce players’ risk of concussions.

The helmet was ambitiously called the Revolution. It became the most widely used helmet in the NFL …. earning millions for the company… in sales to players in college, high school and youth leagues. Riddell designed the Revolution helmet with the help of Biokinetics, at the Ottawa-based biomechanical firm … which was also working with the NFL’s Minor Traumatic Brain Injury (MTBI) Committee to test helmets and study head injuries

As early as November 2000…. Riddell received a warning from Chris Withnall, the senior engineer at Biokinetics, a Study …..showing that no football helmet, no matter how revolutionary… could prevent concussions.

In fact, the report stated, even a helmet that passed the industry safety standard for protection against skull fractures and other severe head injuries could leave a player with a 95 percent likelihood of receiving a concussion from a strong enough blow.

Frank Azar, revealed this report in this landmark trial…. but it did not deter Riddell from marketing the helmet as protection against concussions. Riddell promoted the Revolution by saying that players who wore it were 31 percent less likely to suffer a concussion – a figure criticized as an exaggeration by leading experts on head injuries and some members of Congress.

in 2002, the Revolution quickly became popular among NFL players and youth athletes. The Indianapolis Star wrote: “The product of years of research, Riddell’s ‘Revolution’ is being marketed as a first-of-its-kind helmet, one designed to reduce the risk of concussions. After the Revolution took the country by storm, Riddell hired some of the premier concussion researchers in the country, at the University of Pittsburgh Medical Center (UPMC), to study the new helmet.

The findings of the study, published in the February 2006 edition of Neurosurgery, became a point of controversy. According to Riddell, the study found that athletes wearing the Revolution had a 31 percent decreased risk of concussion. But the UPMC authors disputed that claim.

UPMC not only disputed that claim, but notified Riddell that “this data should not be used as a marketing ploy or marketing tactic from a scientific paper that was done not for those purposes.” Dr. Robert Cantu, a neurosurgeon and leader in the field of sports-related concussion research, wrote a comment published in Neurosurgery noting that the study contained a “serious, if not fatal, methodological flaw.”

As Revolution sales soared– more than 2 million were sold between 2002 and 2008 – the helmet company’s claims caught the attention of Sen. Tom Udall (D-NM). Udall sent a letter to the Federal Trade Commission about what he called misleading safety claims and deceptive practices in the helmet industry. He singled out Riddell’s 31 percent claim, and wrote that he was particularly concerned about the marketing of the youth Revolution helmet.

Today, Riddell finds itself caught in the line of fire with little protection to guard themselves from the hard hits…. that they may take in the pending NFL concussion litigation.

Frank Azar has earned the highest respect from citizens and lawyers alike…. as one of the best Trial lawyers in Denver…. In Colorado….. and in the United States. His goals….. Not ONLY To get Justice for clients…but to make sure….. Products are made Safer and Manufacturers more Accountable

Frank has built a substantial reputation by consistently winning cases other law firms have turned down. 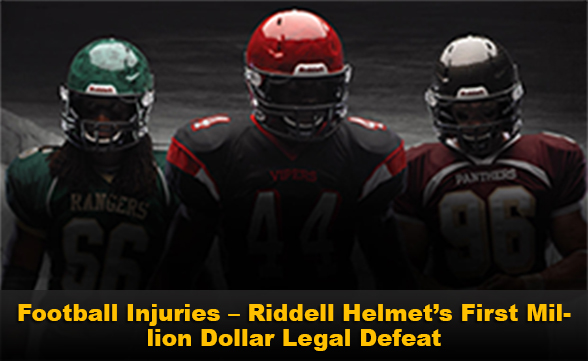