Clay Rush, was a kicker for the Colorado Crush in the Arena Football League (A.F.L.) in 2008 when he sustained a series of hits to the head over several games — hits that were mishandled by a team physician, an employee of HealthONE Clinic Services,

Clay had a passion for the game and had had a long and successful history with football and the AFL. He was Kicker of The Year in 2000 & 2003 and All Arena First Team. In 2001, he had the league record of 110 extra points made.

On April 4, 2008 Clay sustained his first concussion while playing at the Pepsi Center in Denver, CO against the Los Angeles Avengers. Clay felt dazed and unbalanced but was able to finish the game. He played the next game on April 11, 2008 against the Cleveland Gladiators. On April 19, 2008, he played against the Kansas City Brigade and he was hit again suffering his second concussion in two weeks. Clay does not remember what happened immediately after the hit and may have blacked out.

It was not until April 21, 2008 that Clay saw the team physician, who briefly evaluated him and instructed him to take Tylenol and rest as needed. Clay rested during the week and never physically exerted himself. He continued to experience post-concussion symptoms, such as nausea, dizziness, insomnia, lightheadedness, and blurred vision.

The team physician cleared Clay to play in the April 25, 2008 game in Denver against the Chicago Rush, without performing a follow-up evaluation or testing. However, Clay was never advised of the symptoms to look for or made aware of the risk of returning to play too soon following a concussion. The team physician did not follow any of the medical standards for clearing Clay to play, following a concussion, including making sure that Clay’s symptoms were gone and did not come back after exertion.

Rather, the team physician stated that since Clay was just a kicker and not in every play, he could be watched throughout the game. That night, Clay played his last football game against the Chicago Rush. He was not hit again, however, he continued to have the same post concussion symptoms when he exerted himself which resulted in permanent injuries.

Clay now suffers from a traumatic brain injury and is unemployed. He lives with severe headaches, hyper-sensitivity to his environment, visual issues, dizziness, balance issues, and signs of decreased cognitive abilities. If Clay’s concussion had been managed properly by medical personnel, he would have healed with no lasting symptoms. He could have enjoyed life with his wife and two daughters. Instead, he lives his days in pain. His life has changed drastically, from football stud and family man to a man who struggles with a brain injury every day.

Clay’s lawyer, Steve Shapiro, has built his reputation based on aggressive and creative trial work. He has obtained numerous six- and seven-figure verdicts and settlements for clients who have been involved in traumatic situations which altered their lives physically, mentally and financially. And it has earned him the highest respect from citizens and lawyers alike…. as one of the best trial lawyers in Colorado and in the nation. He has seen many innocent, and hard-working people suffer needless injury …And because of that…..He’s driven to help people who had been harmed by the negligent actions of others…His goal….. Not ONLY To get Justice for Clay . BUT To make sure that all Athletes in all sports…. play in the safest environments possible. 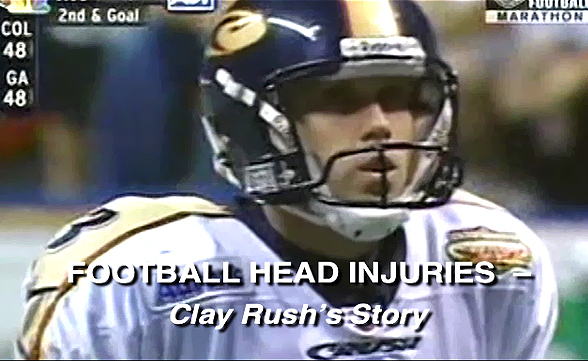