It might seem unpatriotic or even sacrilegious to say anything negative against Coca Cola…. especially when this company, one of America’s most recognized Brands in in the world… the epitome of the American spirit and American Business…. doesn’t live up to the high esteem they spend so much money promoting. From their humble beginnings 125 years ago, Coke has evolved from one product — Coca-Cola — to more than 500 brands in 2012. They’ve grown from selling a modest 9 drinks a day in 1886 to 1.8 billion a day. And they’ve expanded from one city in one country to availability in more than 200 countries around the world.

The history of Coca-Cola is a story of special moments — times with family and friends and special occasions when Coke was naturally there. Every person who drinks a Coca-Cola enjoys a moment of refreshment — and shares in an experience that millions of others have savored. Because we all know that “Things Go Better with Coke”! And all of those individual experiences combined have created a worldwide phenomenon – a truly global brand that plays its own small part on the world stage.

So it might seem unbelievable…. that such an iconic American Brand…. with such a stellar record of community spirit and giving to programs such as reaching out to American Veterans, and giving away $26 Million dollars in grants to 85 community organizations just during the first quarter of 2012, would “Not do right thing” when one of their Coca Cola delivery trucks ran into and severely injured an outstanding community leader and mother, Deborah Kropp.

Today the INSIDER EXCLUSIVE “Goes Behind The Headlines” in “EVERYTHING DOES NOT GO BETTER WITH COKE”– Deborah Kropp’s Story ….. to examine how John M. Phillips, Founder of Law Offices of John M Phillips successfully represented Deborah against Coca Cola when they fought “tooth and nail”… refusing to take responsibility for the severe injuries they caused her.

On July 20, 2007, Deborah Kropp was traveling home from helping her quadriplegic brother as she did every day. Deborah has been there every day helping him since they lost their mother in 2006. A few hundred feet from her Gainesville, Florida home, she slowed down to pull off the road at her rural mailbox, as she did every day. And that’s where this tragic Coca Cola story began…. Because ….At the same time and at same place, Coca-Cola, which was “under-staffed,” …..according to its own employees….they relied on a warehouse worker with a “less than stellar” driving history and several felony convictions to deliver their product on that fateful day in July in an attempt to meet its daily 1.8 Billion servings per day…. .

Worse yet, the Coca-Cola’s truck had a loose toolbox in the passenger compartment…so if the driver had to make a sudden stop for – a child, an animal or someone stopping to get the mail…like Deborah….. it was a recipe for disaster. AND that’s exactly what happened.

The loose toolbox rocketed onto the truck’s accelerator, sending the truck out of control and slamming into the rear passenger side of Deborah’s Ford Mustang and It sent her airborne. Coca-Cola sent out its representatives to the scene. No pictures were taken and no statements were given. And Unbelievably, Coke told Deborah it was not responsible for her injuries, leaving her to pay her medical bills and lost income all by herself. Coke failed to take pictures of its vehicle, fearing it would tell a story that was very unfavorable. In fact, Coke denied any records of any repair bills that proved the damage until one week before trial, when they finally disclosed a $14,000 repair bill, which had been asked for years before. Three surgeries and over a $250,000 dollars of medical bills later, with two more surgeries to go, Deborah approached trial. After a week of trial, the jury awarded Deborah over $1 Million dollars. Finally Coke’s victimization of her was recognized by a jury of her peers…..Coca Cola drinkers like you and me. Coke never apologized, and yet they used unlimited resources to blame the victim, Deborah Kropp…..a fellow American community leader and a mother.

You might think that such an iconic American Brand with such a stellar record of community spirit and giving Millions of dollars to community organizations would stand up and help the people they hurt …..but in this case they failed to do so. The Insider Exclusive Investigative Series in reporting on this actual true courtroom case is sending a message to Coca Cola and other corporations to do the right thing when they’re responsible. And we hope you will share this story with your family, your friends, your neighbors, and community leaders in the hopes that Coca Cola and others start “Walking their own Talk”

John Phillips successful representation of Deborah Kropp has earned him the highest respect from citizens and lawyers alike…. as one of the best Trial lawyers in Florida….. and in the nation. He has seen many innocent & hard-working people become VICTIMS in catastrophic accidents. And because of that….He is driven to fight for people who had been harmed by the willful or negligent actions of others. His goals….. Not ONLY To get Justice for his clients…But To make sure that all Corporations respect Peoples’ lives and take responsibility for their negligent actions. 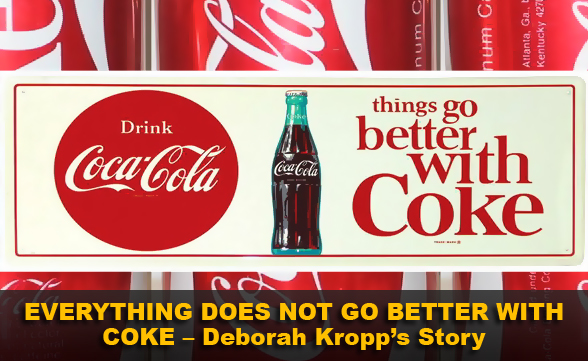 Everything Does Not Go Better With Coke – Deborah Kropp’s Story