In 2012 the U.S. Coast Guard counted 4515 boating accidents involving 651 deaths, 3,000 injuries and $38 million in property damage. Personal watercraft accidents accounted for 19 percent of the total, resulting in 58 deaths and 721 injuries

….To expose the dark side of the Personal Watercraft industry that manufacturers like Kawasaki (Jetski), Bombardier (Sea Doo), Yamaha (WaveRunner), Honda (AquaTrax), Polaris (Sealion) and Arctic Cat (Tigershark)…. don’t want you to know

To Expose the PWC manufacturer’s serious design defects
Create a public awareness to help prevent these tragic accidents
And to educate injured victims that they may have real legal rights against some of these PWC manufacturers
Personal Watercraft, which send their adrenaline-seeking riders skimming atop the surf at up to 85 mph, are also sending them – or anyone who gets in their way – to the morgue. The tragic accident that left the 11-year-old stepson of R&B star Usher… brain dead is raising warning flags and prompting critics to complain that…… it’s just too easy for a careless or untrained thrill-seeker to hop on a personal watercraft and go racing along congested waterways or shores.

“It’s somewhat of a perfect storm,” said Ron Sarver, deputy director for the National Association of State Boating Law Administrators (NASBLA). “There’s been a number of accidents together here… so we have a lot of people saying, ‘What’s happening?’

The best known personal watercrafts are Kawasaki’s Jet Ski, and Yamaha Motor Company’s WaveRunner. But there are dozens of brands of the personal watercrafts, and Americans now own an estimated 1.3 million of them. The number of PWC-related accidents has increased dramatically. The greatest tragedy, however, is that many of these accidents can be avoided. Kristin Beale, of Richmond, Va., endured countless hours of physical therapy since Aug. 28, 2005, when she was struck by another Jet Ski while riding one with a friend on Lake Gaston in North Carolina.

Rules for riding vary from state to state, but for private owners, there is very little opportunity to enforce regulations. And on beaches where waverunners can rent for $95 an hour or more…only by showing you’re at least 16 year old… and sitting through a 10 min boilerplate safety lesson… is all that’s needed to mount the device and take off.

Apart from the obvious hazards of collisions and mechanical breakdowns common to all vehicles, operating PWCs can involve a risk of orifice injuries.

A rider who falls (or is ejected) off the back can land directly in the path of the PWC’s high-pressure jet of water. Such an injury can result in permanent disability or death.

PWCs have an in board engine driving a pump jet… that has a screw-shaped impeller to create thrust for propulsion and steering.

Because these types of abdominal accidents have received little attention from the media, most owners and operators of personal watercraft are unaware of the risk of death or permanent injury.

Last year, on July 1, former astronaut Alan Poindexter was riding on a Jet Ski with his 22-year-old son when his 26-year-old son crashed into them. Poindexter, who piloted the Atlantis space shuttle in 2008, died a short time later at an area hospital. While those accidents have garnered headlines, there have been several other notable wrecks involving personal watercraft:

Blair Holliday, a sophomore wide receiver at Duke University, suffered head injuries while using a Jet Ski in North Carolina on July 4 last year, and reportedly remains in critical condition; Savannah Cayce, 16, of Juneau, reportedly died in June from injuries she sustained while being struck by a Jet Ski as she sat in an inner tube in one of Alaska’s Lakes; 3 women were killed and 4 others were reportedly injured during an accident in October involving a Jet Ski and a 20-foot powerboat at Puddingstone Reservoir in San Dimas, Calif.

HERE SOME REASONS WHY PWCS ARE UNREASONABLY DANGEROUS

Manufacturers Have Over-Promoted PWCs to inexperienced and inadequately trained operators, and have focused their massive marketing budgets on the very young and inexperienced.
According to the National Transportation Safety Board’s study, the vast majority of PWC operators involved in accidents were between the ages of 12 and 21.
Many of these operators viewed the high performance vessel as a “toy.” But personal watercraft are not toys, and people must realize that a 12 year-old child is simply not equipped to handle a 135 horsepower vessel traveling at speeds in excess of 65 mph.
WHAT ARE SOME OF THE DESIGN DEFECTS IN PWCS?

Perhaps the most dangerous aspect of a PWC is the lack of directional control when the throttle is released.
The distinctive nature of the movable water jet, without a rudder or brakes, creates unique handling hazards.
The industry has characterized this phenomena as “off-throttle steering.”
The description of “off-throttle steering”-an oxymoron-describes a situation where an operator instinctively releases the throttle when confronted with a dangerous situation in an attempt to avoid a collision.
Once the water-jet is disengaged, however, the ability to safely steer is lost.
The PWC essentially becomes a torpedo heading in the last principle direction of thrust.
AND WHAT IS THE PWC INDUSTRY RESPONSE TO ACCIDENTS AND IMPROVED SAFETY? The industry has one common response… to products liability litigation involving its products – blame everyone but themselves. Ironically, manufacturers will often claim that the victim was “reckless” or “negligent” because they were operating the vessel at a high speed in close proximity to other vessels.

To avoid the needless loss of life and serious injuries, personal watercraft must be redesigned to include far more safety features. It took a public outcry in the 1960s and 1970s for the U.S. automotive industry to add seat belts and air bags. Now, it is time for marine manufacturers to make safety their top priority in designing a new generation of personal watercraft.

Brian Mazzola is a leading advocate for Safety in the Personal Watercraft Industry… has earned the highest respect from citizens and lawyers alike…. as one of the best Trial lawyers in Beaumont…. In Texas….. and in America . His goals….. Not ONLY To get Justice for his clients…but to make sure that products sold to consumers are continually developed and refined to adopt the latest safest designs.

While no single design change or legislative action will prevent all injuries or deaths, manufacturers need to design safer PWCs to prevent many injuries and save lives. Brian has built a substantial reputation by consistently winning cases other law firms have turned down. His amazing courtroom skills and headline grabbing success rate continue to provide his clients with the results they need……And the results they deserve 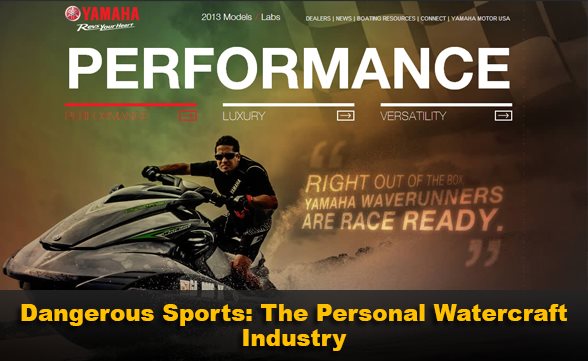