This in an indepth interview of one of America’s most astute TV news journalists, Jane Velez-Mitchell who reported for the nationally syndicated Warner Brothers/Telepictures show “Celebrity Justice.” She is now seen commenting on high-profile cases for CNN, MSNBC, Court TV, Fox News and other national cable TV shows. She has also frequently guest hosted for Nancy Grace on her widely watched CNN Headline News show.

Jane has just completed a non-fiction book for Touchstone, a division of Simon & Schuster, entitled “Secrets Can Be Murder: What America’s Most Sensational Crimes Tell Us About Ourselves.”

Jane asks a probing, disturbing question: Are killers like Scott Peterson and Andrea Yates all that different from the rest of us? What kind of monster would do this? When journalists break the story of a child who’s been kidnapped, a young woman who’s been brutally raped, or a family who’s been slaughtered, that’s the question most of us ask. Secrets Can Be Murder exposes the hidden motivations behind the most sinister acts of recent times, with a behind-closed-doors look at these sensational crimes that will astound you.

Jane shares some shocking news! Many of us possess the same trusting nature as victims and carry around the same secrets as criminals — whether it’s debt, infidelity, or fetishes. With fascinating new insights from investigators and psychologists plus the friends and family of both the victims and the perpetrators, Secrets Can Be Murder illustrates just how little separates our so-called normal lives from that of a sociopath — and how you can stay out of harm’s way.

Jane is the recipient of a Los Angeles Emmy Award and a New York Emmy Award. The KCAL-TV newscasts she co-anchored won three Southern California Golden Mike Awards and an Emmy. She also wrote, directed and produced “Dancing Through Life,” an award-winning documentary.

While working at “Celebrity Justice,” Velez-Mitchell’s reporting earned the show two Genesis Awards from the Humane Society of the United States. 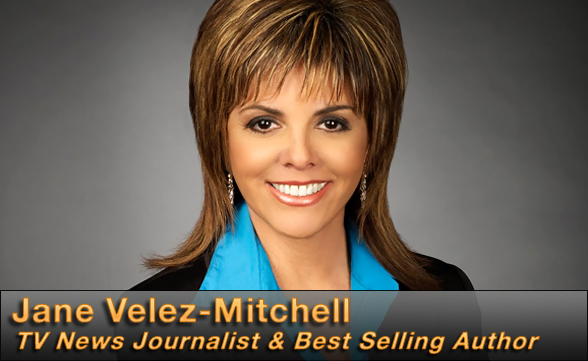