Rudyard Kipling once celebrated a man’s ability to “walk with kings….. and not lose the common touch”. That’s Chris Ritts’ special gift. He’s walked with the best and the brightest, but his shoes have never lost the soil of the common man. Chris Ritts, “The People’s Advocate”, is an exceptional candidate for Hennepin County, Minnesota Judge.

Chris has over 28 years of experience fighting for the rights of individuals in legal matters. He’s helped hundreds of people successfully solve their legal problems. This experience has shaped Chris into one of those very few attorneys that can… and has ….done it all.

He has more experience as a lawyer than most judges in dealing with both criminal and civil cases….and has helped individuals and small businesses in a variety of different legal issues.

Chris has advocated for all people as a private attorney. His 28 years of experience has enabled him to gain a complete understanding of the judicial system, and see how it can work better for everyone.

Now The Constitution guarantees all Americans the right to pursue justice in court when they believe they’ve been harmed. Thomas Jefferson stated that ‘the right to trial by a jury of fellow citizens was a more important safeguard of personal liberty than the right to vote. With a jury, the rights and duties of each of us will be decided by our fellow citizens, not by some bureaucrat or governmental functionary. The courts are the first and last resort for protecting the constitutional rights of Americans…And we need fair and experienced judges to administer justice in our courts In terms of our democracy, the stakes could not be higher because a strong, democratic civil justice system is critical to safeguarding individual rights and promoting public health and safety..

There’s a lot than can be done to improve all Americans rights to justice and that’s why Chris Ritts is campaigning for judge. He wants to make justice better for all Americans.

What motivates Chris to do this? Because he wants to make a difference….A very positive difference …Because he’s a leader. And every leader has to have one very important qualification…. It’s the ability to listen and to understand people and their circumstances.

Sounds easy? It’s not. All too often, we tend to listen to others through our own ears. …And we filter and distort the message… we hear only what we want to hear, and not what others are actually saying to us. Chris listens….because he wants to make a difference in other people’s lives. And he does that by being a careful and empathetic listener when people talk to him.

Listening not only as a lawyer in the courtroom to his clients, judges, and fellow lawyers, but also as a real Minnesota farmers for the past 20 years to everyday workers and people

In this INSIDER EXCLUSIVE Investigative Network TV Special, our News Team “Goes Behind The Headlines” to visit with Chris Ritts in “ “CHRIS RITTS – THE PEOPLE’S ADVOCATE” –….. to examine how Chris stands on the issues and how he want to improve Justice for everyday ordinary people. He’s share with us the reasons he’s running for Judge and why he’s the best choice for the job

Chris’s deep humanity, his courage in the courtroom, and his unyielding commitment to justice and fairness for all Americans, regardless of race or stature, make him the best choice for an open seat, #53, as a Hennepin County District Court Judge in Minneapolis, MN.

This is Chris Ritts’ story….about Making a difference. …. About the voice inside him that drives him to want to do The Right Thing: to help people find justice led by a man with a backbone of steel and the heart of a lion.

Chris’s 28 years as a lawyer demonstrates the mind and soul behind the decisions that have guarded our civil liberties, enlarged our civil rights, and made America a better place for all its citizens.”

Chris has earned the highest respect from citizens and lawyers alike…. as one of the best Trial lawyers in Minneapolis…. In Minnesota….. and across the United States.

His goals are Not ONLY To get Justice for his clients…but to make sure that everyone is treated with equal respect and dignity as guaranteed under the Constitution of the United States.

Chris wants to ensure that all Americans have the right to a fair trial, honest cops, impartial prosecutors, and fair judges with NO AGENDAs…He has built a substantial reputation by consistently winning cases other law firms have turned down. His amazing courtroom skills and headline grabbing success rate continue to provide his clients with the results they need……And the results they deserve. AND BECAUSE OF HIS EXPERIENCE, COMPASSION, AND FAIRNESS, HE IS THE BEST CANDIDATE FOR HENNEPIN COUNTY District Court Judge in Minneapolis, MN 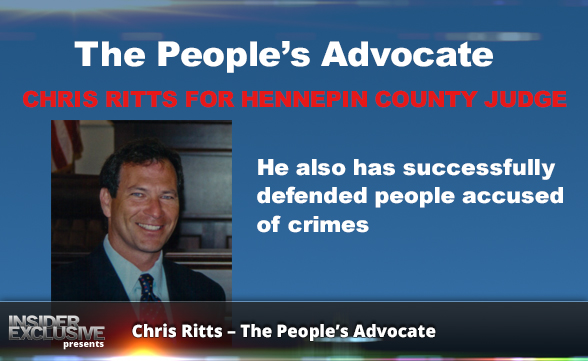