John Ferreira Sr is a self-made multi- millionaire. A Horatio Alger success story who through hard work and dedication, grew his businesses into what they are today.

John’s businesses really took off in the late 1990’s, so he hired a full-time bookkeeper, Angela Platt, to assume responsibility for the finances and bookkeeping for these and other related subsidiary companies.

But on the Friday before Memorial Day in 2006, through another employee’s discovery of a series of questionable checks written by Angela, John discovered Angela had been embezzling money from his companies.

She was hired as a staff accountant by the construction materials company in 1999, at $40,000. per year, and she was authorized to write checks from company accounts to pay business expenses.

Beginning in June 2000, Platt began to write checks from company accounts to herself in amounts ranging from $2,000 to $5,000. Over time the check amounts increased to nearly $50,000 each.

In this new Insider Exclusive, Justice in America, Network TV Special, BROKEN TRUST: GUILTY OF NAKED GREED, our news team is on location with John Ferreira and his lawyer, Eric Brainsky, Founding Partner of the Law Firm of Brainsky Levinson, LLC in Seekonk, Massachusetts to get the complete story of how this shocking story of greed and betrayal was discovered and how justice was administered.

With the assistance of Eric Brainsky, the FBI and local police, his law firm was able to build a case and provide the United States Attorney with enough information to charge Angela with theft, fraud and embezzlement in Federal Court.

She embezzled a total of $6.9 million over a period of seven years and was sentenced to four years in prison and ordered to repay full restitution, plus interest, to her former employer, J&J Materials of Rehoboth, Mass. She pleaded guilty to one count of interstate transportation of stolen property. 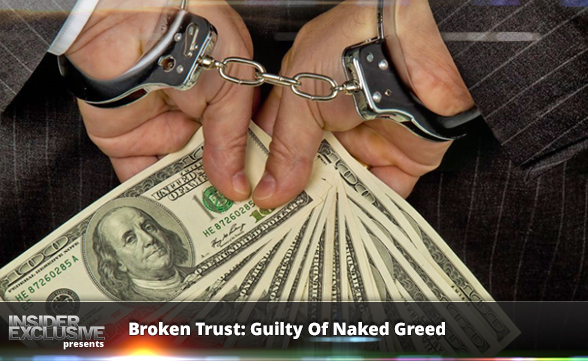