By all accounts Terrance McKinney is the epitome of the All-American: A Decorated Veteran and family man. A Ft Wayne, Indiana native, he became the first U.S. Army recruiter to be awarded the Indiana Army National Guard Soldier of the Year

A College graduate, he married his sweetheart, Kortney, and became the first and only African American employee of the Whitley County, Indiana Sheriff’s Department.

After his time in the military, law enforcement was his natural next step. What he didn’t anticipate was the racism he would face from his co-workers and from the Sheriff himself.

Nine months after he was hired, he was fired on trumped-up charges by Sheriff Mark Hodges. McKinney sued the sheriff’s office in U.S. District Court for the Northern District of Indiana, claiming race discrimination.

The district court granted summary judgment for the Office of the Sheriff, against McKinney, which was reversed and remanded back down to the District Court,

The now retired, distinguished former Chief Justice of the Seventh Circuit Court of Appeals, Richard Posner was so outraged by the Sheriff Hodges’s dishonesty and obvious racism

He asked the Sheriff’s attorney if Sheriff Mark Hodges was a liar or an idiot.

In this Insider Exclusive “Justice in America” Network TV Special, “BLACK… BUT NOT BLUE ENOUGH – A Black Police Officer’s Ordeal with Racism on the Force”

Our news team visits with Terrance McKinney and his lawyers Robert Owen Vegeler and Rachel Guin to discuss the unique aspects of this case, the legal challenges they faced in this case, and the current struggle against racism and cronyism going on across the country. 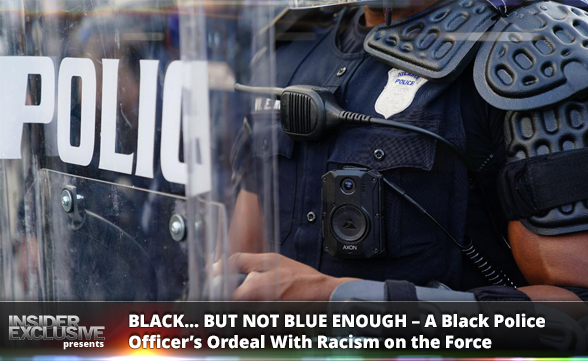