In 1979, Dr. Lois Lee abandoned a promising career as a scholar and social policy expert, devised a plan, and took action. Since that time, she has been rescuing America’s children from the ravages of street prostitution. Her single-minded efforts and dedication led to the development of Children of the Night, where she still serves as president.

Dr. Lee is an instructor at the Los Angeles Police Department’s Police Academy, training juvenile detectives in how to detect, treat, and rescue children involved in prostitution. She frequently serves as an expert witness for federal and state prosecutors enforcing laws against dangerous pimps. She first came to the attention of the news media and homicide detectives during the “Hillside Strangler” investigation, where her efforts led to the prosecution of Angelo Buono for these murders. Her Ph.D. dissertation ‘The Pimp and His Game’ is relied on by vice officers, district attorneys, and U.S. attorneys nationwide as a guide for their treatment of child prostitutes, for jury education, and for the prosecution of dangerous pimps.

Dr. Lee has received countless awards for her work, the most prestigious being the President’s Volunteer Action Award, which was presented to her by President Ronald Reagan at the White House in 1984. She has been profiled on national television, including CBS’ 60 Minutes, and her work was depicted in a CBS TV movie entitled Children of the Night. Her humanitarian work has been recognized with a National Caring Award and a permanent memorial portrait in the Frederick Douglass Museum and Hall of Fame for Caring Americans in Washington, D.C. Dr. Lee is an extraordinary woman who has utilized her courage, compassion, and wisdom to ensure that child prostitutes can get the help and hope they so desperately need. 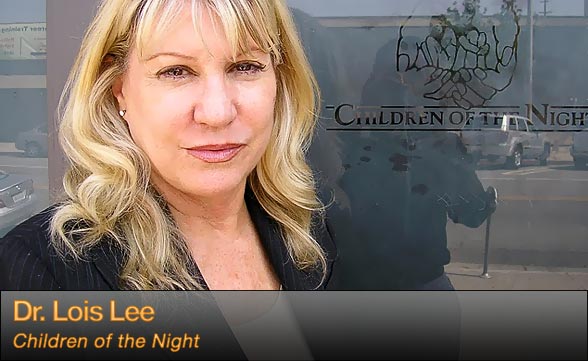